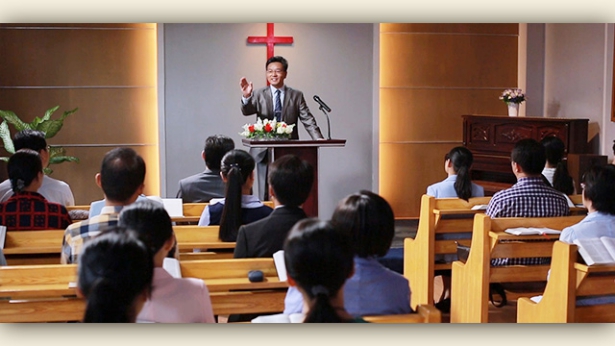 The work carried out by the one who is used by God is in order to cooperate with the work of Christ or the Holy Spirit. This man is raised up by God among man, he is there to lead all of God’s chosen ones, and he is also raised up by God in order to do the work of human cooperation. With someone such as this, who is able to do the work of human cooperation, more of God’s requirements toward man and the work that the Holy Spirit must do among man can be achieved through him. Another way of putting it is like this: God’s aim in using this man is so that all those who follow God can better understand God’s will, and can attain more of God’s requirements. Because people are incapable of directly understanding God’s words or God’s will, God has raised someone up who is used to carry out such work. This person who is used by God can also be described as a medium by which God guides people, as the “translator” who communicates between God and people. Thus, such a man is unlike any of those who work in God’s household or who are His apostles. Like them, he can be said to be someone who serves God, yet in the substance of his work and the background of his use by God he differs greatly from the other workers and apostles. In terms of the substance of his work and the background of his use, the man who is used by God is raised up by Him, he is prepared by God for God’s work, and he cooperates in the work of God Himself. No person could ever stand in for his work, it is human cooperation that is integral to the divine work. The work carried out by other workers or apostles, meanwhile, is but the conveyance and implementation of the many aspects of the arrangements for the churches during each period, or else the work of some simple provision of life in order to maintain the church life. These workers and apostles are not appointed by God, much less can they be called those who are used by the Holy Spirit. They are selected from among the churches and, after they have been trained and cultivated for a period of time, those who are fit are kept on, while those who are unfit are sent back to where they came from. Because these people are selected from among the churches, some show their true colors after becoming leaders, and some even do many bad things and end up being eliminated.

Work in the mind of man is too easily achieved by man. Pastors and leaders in the religious world, for example, rely on their gifts and positions to do their work. People who follow them for a long time will be infected by their gifts and be influenced by some of what they are. They focus on people’s gifts, abilities and knowledge, and they pay attention to some supernatural things and many profound unrealistic doctrines (of course, these profound doctrines are unattainable). They do not focus on changes to people’s disposition, but rather they focus on training people’s preaching and working abilities, improving people’s knowledge and rich religious doctrines. They do not focus on how much people’s disposition is changed or how much people understand the truth. They do not concern themselves with the substance of people, much less try to know people’s normal and abnormal states. They do not counter people’s notions or reveal their notions, much less mend their deficiencies or corruptions. Most of the people who follow them serve by their natural gifts, and what they express is knowledge and vague religious truth, which are out of touch with reality and are completely unable to confer people with life. In fact, the substance of their work is nurturing talent, nurturing a person with nothing into a talented seminary graduate who later goes on to work and lead.

8. People who believe in God should obey God and worship Him. Do not exalt or look up to any person; do not put God first, the people you look up to second, and yourself third. No person should hold a place in your heart, and you should not consider people—particularly those you venerate—to be on a par with God or to be His equal. This is intolerable to God.

Some people do not rejoice in the truth, much less judgment. Instead, they rejoice in power and riches; such people are called power seekers. They search only for those denominations in the world with influence, and they search only for pastors and teachers that come from seminaries. Though they have accepted the way of truth, they are only half-believing; they are incapable of giving all of their hearts and minds, their mouths speak of expending themselves for God, but their eyes are focused on the great pastors and teachers, and they do not spare Christ a second glance. Their hearts are fixated upon fame, fortune, and glory. They think it out of the question that such a meager person could be capable of conquering so many, that one so unremarkable could perfect man. They think it out of the question that these nobodies among the dust and dunghills are the people chosen by God. They believe that if such people were the objects of God’s salvation, then heaven and earth would be turned upside down, and all people would laugh themselves silly. They believe that if God chose such nobodies to be perfected, then those great men would become God Himself. Their perspectives are tainted with unbelief; more than not believing, they are simply preposterous beasts. For they value only status, prestige, and power, and they esteem only large groups and denominations. They have not the slightest regard for those led by Christ; they are simply traitors who have turned their backs on Christ, on truth, and on life.

What you admire is not the humility of Christ, but those false shepherds of prominent standing. You do not adore the loveliness or wisdom of Christ, but those libertines who wallow in the filth of the world. You laugh at the pain of Christ who has no place to lay His head, but you admire those corpses that hunt for offerings and live in debauchery. You are not willing to suffer alongside Christ, but you gladly throw yourself into the arms of those reckless antichrists, though they only supply you with flesh, words, and control. Even now, your heart still turns toward them, toward their reputation, toward their status, toward their influence. And yet you continue to hold an attitude whereby you find the work of Christ hard to swallow and you are unwilling to accept it. This is why I say that you lack the faith to acknowledge Christ. The reason you have followed Him to this day is only because you had no other option. A series of lofty images are forever towering in your heart; you cannot forget their every word and deed, nor their influential words and hands. They are, in your heart, forever supreme and forever heroes. But this is not so for the Christ of today. He is forever insignificant in your heart, and forever undeserving of reverence. For He is far too ordinary, has far too little influence, and is far from lofty.

Excerpted from “Are You a True Believer in God?” in The Word Appears in the Flesh

Previous : Why does every new stage of God’s work encounter the wild defiance and condemnation of the religious world? What is the root cause?

Next : What are the consequences of someone believing in God in religion and being subject to the deception and control of the Pharisees and antichrists? Can one be saved by God if they believe in God this way?

Testimonies for Christ of the Last Days