Later, I saw it said in the words of God: “The fate of man is controlled by the hands of God. You are incapable of controlling yourself: Despite always rushing and busying about for himself, man remains incapable of controlling himself. If you could know your own prospects, if you could control your own fate, would you still be a creature?” (“Restoring the Normal Life of Man and Taking Him to a Wonderful Destination” in The Word Appears in the Flesh).

“Is it the thoughts and wishes of man that have brought him to today? Many people go their whole lives without having their wishes fulfilled. Is this really because of a fault in their thinking? Many people’s lives are filled with unexpected happiness and satisfaction. Is this really because they expect too little? Who of the whole of mankind is not cared for in the eyes of the Almighty? Who does not live in the midst of the Almighty’s predestination? Whose birth and death come from their own choices? Does man control his own fate?” (“The Eleventh Utterance” of God’s Utterances to the Entire Universe in The Word Appears in the Flesh). God’s words awakened me to the truth that: People’s everything is in the hands of God and people cannot grasp hold of their destiny themselves. What family a person is born into, their appearance, how cultured they are and what work they will do in the future are all things that God pre-determined long ago. No one can get around this. No wonder my many years of hard work were exchanged for contrary to my wishes. It turns out I am a created being and cannot dominate mine or my child’s own destiny. Mine and my daughter’s destiny is dictated by God. As a created being, one can only obey the dominance of the Lord of creation and be at the mercy of God to be able to attain God’s care and protection. Otherwise one can only be afflicted and fooled by Satan! After I had understood God’s intentions, I gave up the forced education and observation of my child and just prayed to deliver her to God and obeyed the arrangements dictated by God. This way of living felt much more relaxed.

One day I saw it said in the Sermons and Fellowship on Entry Into Life: “What is the point of view of some people who still want to make their children successful now? It is Satan’s point of view. You have Satan’s point of view and the way you are going is also Satan’s way. Where are you pushing your children to? Are you not pushing them to hell? You have died and not been saved and your children have also died and not been saved either. You have not brought your children to the ark. Noah worshiped God. In that era, he was a righteous man and was saved. When God wished to destroy that era, God was righteous and said: Noah is a righteous man. I cannot let Noah perish as well, I must save him. God instructed Noah to make an ark. Noah was a righteous man and God wanted to save him. His children also benefited by association. Why did they benefit? Because Noah also made his children worship God and made them believe in God. Although they did not have such strong faith, Noah led them in this way and brought them before God and regardless of the outcome, Noah fulfilled his duty and God saved them too. They benefited from their association with Noah. Is that not the case? How do you view your children now? If you take the path of believing in God but let your children take Satan’s path and be successful, then that proves that you do not truly believe in God” (“Bringing God Into Real Life Is Essential” in Sermons and Fellowship on Entry Into Life (I)). “When you believe in God and read God’s words and the truth, why do you have more humanity, reason and conscience, the more you read them? Why do you have more real love and true wisdom, the more you read them and why does your heart move more toward good and is more capable of returning to God the more you read? Why do you love the truth and goodness more and are more able to worship God and unconsciously take the true path in life the more you read? What is going on? The facts are enough to prove that the word of God can save people from corruption and make people break free from Satan’s corruption. The word of God can cleanse people of their corruption and finally, the word of God can make people live out a true life and live out the likeness of man” (“How Does God Save Corrupt Mankind?” in Sermons and Fellowship on Entry Into Life (III)).

A few days later, my daughter came home from school and I brought out the book of God’s word to read to her. But before I had even finished a paragraph, she impatiently said: “Don’t read to me. If you believe then believe! I have a lot of homework. When do I have time to listen to you reading to me?” Seeing her unhappy face, I said: “Do not write yet. Read God’s words first and then write.” After she had listened to me, my daughter frowned and said: “At the beginning, who was it who watched me and made me study hard to take exams to go to university? And now you ask me to believe in God. Whatever you say goes. Don’t talk to me now! I do not want to hear it! To believe or to read, that is your own business, do not make me!” Hearing my daughter’s words and seeing my daughter’s cold and detached expression, I felt like a knife had been twisted in my heart. I thought of the following words of God: “Mankind is silly and doesn’t realize this. All you know is that if your children get into a top university they will be promising and bring glory to their ancestors. Until one day, your children return and you tell them about believing in God, and they show antipathy. After you tell them about the truth, they say you’re foolish and laugh at you, and scoff at what you say. At that time you will think: ‘Oh, sending my children to those schools to accept such education was the wrong path. I chose the wrong path, but it’s too late for regret.’ For human beings, once these ideas and viewpoints are instilled, take root, and take form, they are not something that can be removed overnight, nor can they be changed overnight. You can’t turn around their situation or their thinking, and you can’t remove the things in their ideas and viewpoints” (“Knowing Yourself Requires Knowing Your Deep-rooted Thoughts and Views” in Records of Christ’s Talks). God’s words are so real! Am I not the same as God’s words have described? Choosing the wrong path for my child’s education resulting in her ignoring God’s work is all my fault. If I didn’t instill in her the idea that “The worth of other pursuits is small, the study of books excels them all” and that “Knowledge can change your fate,” these satanic philosophies and ways of thinking, how could she have become like this? In order to pull my daughter back from the wrong path, I pray to God silently in my heart: “God, I cannot give up. I know that Satan’s ideas and viewpoints have already taken root in my daughter’s heart and that this cannot be reversed in one or two days. Only Your words can change people and save them! God, I entrust You with my daughter and ask You to lead her and to change her….” From then onward, as soon as she came back from school, I found time to read God’s words to her and explained to her why I no longer educated her to study knowledge. No matter how coldly she spoke to me, I never lost faith. Under God’s leadership, my child’s attitude gradually improved. I read God’s words and sang hymns to her and she was willing to listen. Sometimes after coming back from school, she even talked to me about what was going on in school and seeing that I was tired from working hard, she even proactively helped me. Seeing such a big change in my daughter, I thanked God from the bottom of my heart. I know that this was all achieved by the word of God! God’s words not only fixed the rift between my daughter and me, but also changed my daughter. It really is only the word of God and truth that can save and change people! 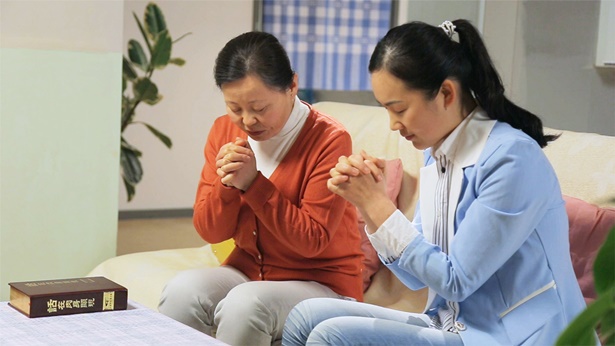 Later, my daughter also followed me in believing in God. After going to meetings and reading God’s words for a while, the change in my daughter became even greater. When she had time she not only was capable of helping me do the housework but we also often fellowshiped about the word of God together and were able to speak words from the heart to each other. When my daughter saw me doing something in a way that was not in accordance with the truth, she could communicate this to me and when I saw that my daughter was doing something unsuitable, I could also point this out to her and my daughter could accept it and moreover, could seek out the related truth to understand herself. The feelings between mother and daughter became better and better. Seeing us getting on like close friends, our neighbors were all especially envious. Seeing the change in my daughter, I especially thanked God. It was God who saved my daughter and me in time and made my daughter take the right path in life. After this experience, I truly understood that the best education for children and the truest love for children was to bring them before God to receive God’s salvation. Because only God can bring us real life! Thank God! May all glory be to Almighty God!